Living to train or training to Live. I'll have to get back to you on that one.

First and foremost, happy new year ! I am starting this blog to reach out and connect with other endurance athletes…..do I really need any other reasons?

Currently, I am in the final week of my 2011 triathlon “season”, which just happens to be the start of a new year. I have my first 140.6 this coming weekend at the HITS Triathlon Series race in Naples, Florida and I am feeling both nervous and excited. Nervous for the unknown and the struggle that awaits me somwhere in those 140.6 miles. I imagine I will hit more than one wall of pain and hurt throughout the race. I am also excited because this marks the completion of my first full year of training. I literally started walking in November 2010, which my Dad and girlfriend found hilarious at the time. Joking aside, I have made some serious improvements this year, mainly in my training, which has led to better race times. I plan to continue progressing and learning the ins and outs of the three discplines that make up the holy triumvirate of triathlon….swimming, biking, running. 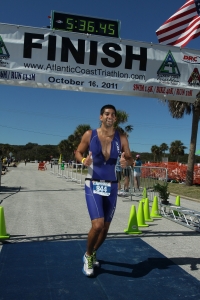 I had raced in 2008 and 2009 but trained inconsistently since I had no idea what I was doing those first two years. I would string a month or two of training together and then stop training after races, thereby losing all momentum and fitness. I did not race at all in 2010 and frankly cannot find any good reason why that happened. It is an unsolved mystery to me….

However, I came back in 2011 to race with some friends at the Nautica South Beach Tri. I fell in love with triathlon training and racing all over again. I layed a good foundation early on in the year in my preparation for South Beach. Shorlty thereafter, I continued training but had to spend the summer studying for the Florida Bar exam. Thankfully I passed. Something about sitting inside a library all summer flipped a switch and I returned to triathlon training with a vengeance.

Which brings me to this point, I am lucky to both train and race in paradise…..the Sunshine State. I have yet to leave Florida for a triathlon and there is almost no need to do so.